Iodine History- A little Iodine for the Figure!

A Little Iodine for the Figure! 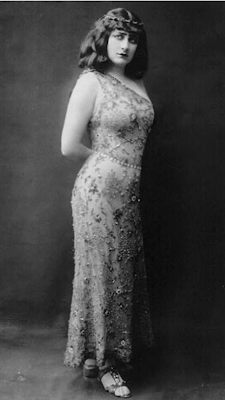 Mary Garden (20 February 1874 - 3 January 1967), was a Scottish-American operatic soprano with a substantial career in France and America in the first third of the 20th century. She spent the latter part of her childhood and youth in the United States and eventually became an American citizen, although she lived in France for many years and eventually retired to Scotland, where she died.
Described as "the Sarah Bernhardt of opera", Garden was an exceptional actress as well as a talented singer. She was particularly admired for her nuanced performances which employed interesting uses of vocal color. Possessing a beautiful lyric voice that had a wide vocal range and considerable amount of flexibility, Garden first arose to success in Paris during the first decade of the 20th century.
source: wikipedia- Mary Garden
Miss Mary Garden was also an iodine aficionado! What was up with operatic sopranos and iodine? Here's another, Erica Koeth, German Operatic soprano: Erika Koeth Ms. Koeth used iodine to ward off illness... but still. Iodine was a CURE-ALL back in the day...
Mary Garden took 10 drops of iodine in milk each evening. I assume that this was lugol's solution, which would be 62.5 mg per day. An obscenely large dose according to the FDA, not much by informed standards. Dr. William Brady, a well known health coloumnist was very keen on iodine but he only recommended 200mcg per day. He was quite aghast at Mary Garden's dosing :)
Apparently Mary was very disciplined in life and diet so the title in the article below might be a bit misleading, "A Little Iodine for the Figure". Although.... hmmm... we need iodine in order to make thyroid hormone, the thyroid is the master gland of metabolism... could it be?
The only current celebrity that I know of that supports the use of iodine is Suzanne Sommers. Most opt for a thyroidectomy or associated removals... I am just waiting for the iodine word to spread to the celebrity world. We need an Angelina Jolie to make high-dose iodine supplementation "ok" to those that... well, care what celebrities do, or think.
I know that my internet brethren and sistren tried with Oprah, Cynara Coomer and Brooke Burke. Heck, I even "liked" Brooke Burke's facebook page and she STILL did not listen to me. LOL.

Email ThisBlogThis!Share to TwitterShare to Facebook
Labels: celebrity, figure, iodine, metabolism, milk, physique, weight control
Tweet
All of my messges on this board     All of my messges anywhere