Yep. Iodized Cigarettes and Cigars. Experimentation with inhalation of vapors of iodine was very common in the 1800s. Various means of inhalation are documented, by means of special apparatuses developed especially for that purpose, placing iodine crystals on a heated plate,  pastilles to burn... and yes, iodized cigarettes and cigars.
The most recent example of an iodized cigarette I can find is "Drakes Iodized Cigarettes", circa WWII.
Drake Iodized cigarettes were manufactured between 1946 and 1959. The pack that I bought was manufactured in 1946, according to the gentleman that I bought it from. This apparently is of importance to collectors of all things tobacco, not so important to me, a collector of all things iodine.
Drake Cigarettes were marketed as being healthful based on the fact that nicotine constricts the capillaries  and iodine expands the capillaries. Whether or not the potassium iodide in these cigarettes counteracted other deleterious effects of smoking tobacco will never be known.
The history of iodizing tobacco or herbs goes back further than the forties.  The following is from The Provincial Medical and Surgical Journal, 1852: link
MATERIA MEDICA.

On Iodized Cigars. — It has been suggested by Kletzinsky that the iodized cigars introduced by Chartroule and Bertow might be advantageously used more generally in medicine. He finds—
1. That a sufficient quantity of iodine may be found in a cigar which, after being iodized, has been lying exposed for four days in a warm room. (We may observe that the process of iodizing consists in lightly washing a cigar with an alcoholic solution of iodine, or in exposing it for a few minutes, in a closed box or vessel, to the simultaneous action of iodine vapour and steam.)
2. The greater part of the iodine which has been taken up is found in the ash as iodide of  calcium and magnesium.
3. The smoke, after being passed through  wool to retain any particles of ash, and then through a neutral solution of starch, did not give rise to the slightest blue coloration, even after the neutralization of the carbonate of ammonia contained in the smoke, with acetic acid. On the addition, however, of chlorine water or nitric acid, a blue tint was evolved, showing that there was a little iodide of ammonium, although no free iodine, in the smoke.
4. After a few puffs, the saliva aud buccal mucus gave distinct, although slight, traces of combined iodine.
5. After smoking an iodized cigar, iodine could generally be detected in half an hour, and often earlier, in the urine.—Kletzinsky in Wien. Med. Wochenici No. 39, 1851.

I found a reference to smoking iodized cigars in popular literature of the day, specifically in a work of fiction, "The Round of Wrong, A Romance of To-day", by Edmond About, published in 1843. link
The pure weather, however, did not weary Germaine: it cured her slowly. M. Le Bris watched this miracle of the blue sky : he looked on while nature was acting, and followed with passionate interest the gradual progress of a power superior to his own. He was too modest to claim the honour of the cure, and confessed in good faith that the only infallible medicine is that coming from on High.
Still, in order to deserve the aid of Heaven, he himself aided it a little. He had received from Paris Dr. Chartroul’s iodometer, with a stock of iodized cigarettes. These cigarettes, composed of aromatic herbs and soothing plants infused in a tincture of iodine, introduce the medicament into the lungs, accustom those most delicate organs to the presence of a foreign body, and prepare the patient to inhale pure iodine through the tubes of the apparatus.
The treatment was successful. So successful, in fact, that Germaine decides that her doctor is being to cautious with the dosage... 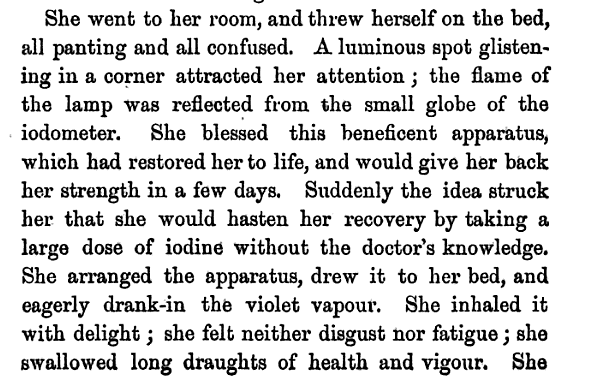 And yes, this wanton act of iodine delerium throws her into a health crisis. She is at death's door for some time and then is miraculously, completely, unequivocally, HEALED.
Here we have a recipe for "Hirtz's Antiasthmatic Cigarettes". Source: The American Druggist and Pharmaceutical Record, 1909. link

Dissolve the potassium salts in the diluted alcohol, incorporate the stramonium extract, moisten the stramonium and tobacco leaves with the liquid and roll into one hundred cigarettes in paper covers, using the rice paper ordinarily used for this purpose. Another form of aromatic cigarette sometimes spoken of as antiasthmatic cigarette is made by dissolving potassium nitrate in six times its own weight of water, impregnating filter paper with this solution and making cigarettes, from this paper. This formula is sometimes varied by impregnating the leaves of balm, of sage or anise seed with the solution of nitrate, drying and making this up into cigarettes, using the nitrated filter paper as a wrapper.

A patent for medicated tobacco granted in 1931 link

This invention relates to medicated tobacco and process of making the same, and it comprises more specifically the treatment of smoking tobacco for pipes, cigarettes or cigars with iodine, whereby the iodine may be effectively administered in the small amounts necessary for body metabolism and for the treatment of various infections of the respiratory organs, as well as thyroid disease, blood and glandular diseases, and numerous others.

Iodine has long been recognized not only as a powerful antiseptic, but also as having great eificacy in the treatment of numerous diseases. Tobacco lends itself extremely well as a vehicle for the administration of iodine to the human body, since, because of its heat in burning, the iodine which it carries is volatilized, and in its volatilized condition is inhaled.

In accordance with my invention, pure iodine crystals are heated in aclosed chamher to a temperature of from 110 C. to 120 C., this temperature being sufficiently high to practically completely vaporize the iodine. The pure iodine vapor is then conducted to an air tight chamber containing the tobacco, which has been previously prepared by any well known method for use in pipes, cigarettes or cigars. The temperature of this second chamber is maintained at, or slightly below, room temperature (approximately 70 F.), thus permitting the iodine vapor to return to a crystal state, and in such state to be deposited upon the tobacco. After an exposure of from twenty-four to seventy-two hours the tobacco, now containing the iodine, is removed from the treating chamber and the iodine content determined by the iodine starch test. The treated tobacco is then blended with untreated tobacco until the desired blend and iodine content is obtained.

An alternative process consists in immersing the tobacco ina pure grain alcohol solution, which contains 25% iodine and 15% potassium iodide. The tobacco is allowed to remain in this solution for from twenty-four to seventy-two hours at slightly below room temperature, that is, somewhat under 70 F.

At the end of this time the excess solution is drained off and the tobacco is dried for several days at a temperature low enough to prevent volatilization of the iodine which is intimately associated with it in crystalline form. The alcohol is, thus, completely evaporated, leavin the iodine deposited in the tobacco. As 1n the process first described, the iodine content is next determined by the iodine starch test and the treated tobacco is then blended with untreated tobacco to obtain the desired blend and percentage of iodine.

Having described my invention, what I claim is: i.

1. The process of medicating tobacco with iodine which consists in first converting iodine to a fluid state and, in such state, bringing it into contact with tobacco to be treated, and finally in crystallizing the iodine while in contact with the tobacco to thereby intimately associate it therewith.

2. The process of medicating tobacco with iodine, which consists in first volatilizing iodine crystals by heat to convert the iodine into vapors, an finally, in the presence of tobacco to be treated, re-crystallizing the iodine by reducing the temperature of its vapors, to deposit it upon the tobacco and thereby medicate it.

3. The process of medicating tobacco with iodine, which consists in heating iodine crystals in a closed chamber to the point of volatilization of the iodine, conveying the vapors so produced to a second chamber containing tobacco to be treated, and maintaining the contact of iodine and tobacco in said second chamber for from twenty-four to seventy-two hours at a lower temperature, thereby to cause re-crystallizationof the iodine.

4. The process of medicating tobacco with iodine, which consists in preparing a solution of pure grain alcohol and iodine, soaking tobacco in such solution at slightly below room temperature, draining off the excess of the solution, and finally drying the treated tobacco at slightly below room temperature to prevent volatilization of its iodine content.

back to Drake. Images from a leaflet to doctors on Drake Iodized Cigarettes. 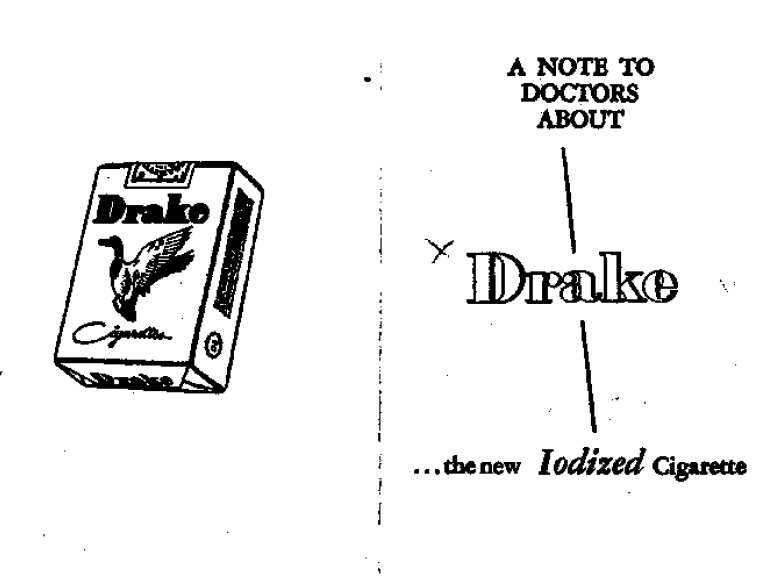 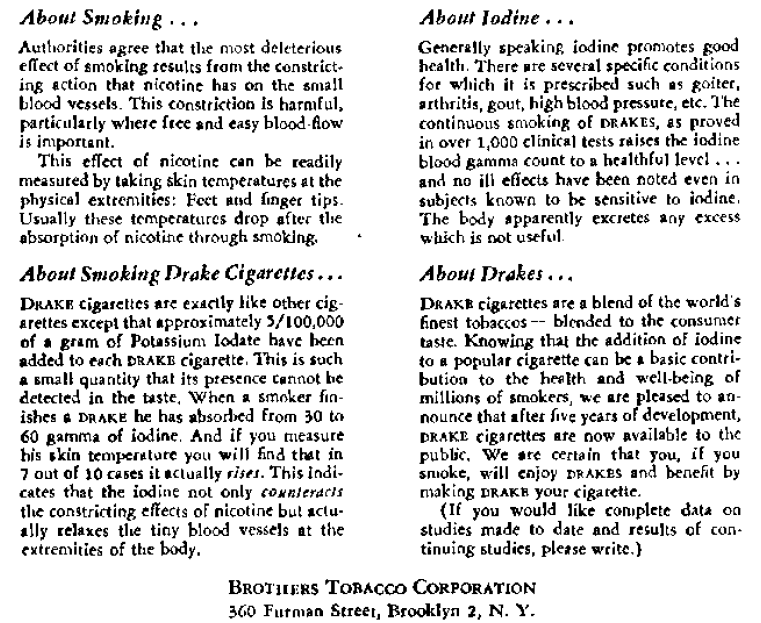