Hello, I just wanted to post here to give an update on my EC after years of having it, and coming on these forums. I still see plenty of old faces.

After all the tests I have had, and all the trials and experiments I had done on myself, I have been able to control my EC for over a year.

The cause of my EC is contact irritation, I believe the primary culprit was my toothpaste. Troubling though is that toothpaste is not the only irritant that may affect my EC. I can certainly vouch for the fact that sodium lauryl sulphate (SLS) may be a major factor in my EC, as it is found in soap and shampoo, both of which can come into contact with the face and skin of the lips. SLS has been study intensively and is known to cause skin conditions in people, and many doctors now reccommend people with sensitive skin to avoid it. I suffer from lichen sclerosus as well, so there is double reason for me to avoid SLS, and not just SLS but all it's derivatives, and there are many of them, as well as all harmful abrasives.
I fear that I may have fallen for the digestive health mantra, and have been seeing a spealist that wanted me to undertake lots of expensive tests and treatments (mostly in the form of supplements) none of which have helped my EC. This is documented in my past posts.

Topical application of emolients (dozens of which I have tried over the years) do nothing but mask symptoms. The leave it alone approach that Daniel Miller advocates I also tried, and believe to be a false and misleading course of action against EC. I am not convinced that Daniel was not suffering from a contact irritation from a chemical that was coming in contact with his lips (likely through a hygiene product he was using and stopped using). I believe he may have confused himself into thinking that his EC disappeared because of his leave alone efforts, when they have played no part at all.
So enough on what has not worked.

I have eliminated toothpaste altogether, this may sound far fetched, but I have simply not been able to find a toothpaste that does not cause inflammation of the lip skin. I can list all of the pastes, but I sense this would not be helpful, and as most pastes likely contain much of the same chemicals, the best advice I can give would be to avoid them all. The truth about mouth hygiene is that the mouth is cleaned from the brushing action from a toothbrush, and not from the paste applied. The paste is to give the illusion of freshness, it is a scam to sell product. You do not need it. It felt a bit weird the first few weeks to adjust, I do not suffer bad breathe, but the feeling is different, especially after brushing without the taste of spearmint or some such flavouring found in paste.

In addition to the eliminate of toothpaste, you need to use a soap which has only natural ingredients. I have found soap bar very helpful, as the one I use contains only food grade oils, such as coconut oil and argan oil, and I can wash my whole body with it at the same time. As for soap I use aloe vera soap with no SLS or parabens.

The objective is to avoid contact with any/all chemical cleaning agents, so that would be 99% of hygiene products on the market. This is easier than you may think, you simply remove it from your environment, and if you share a washroom with anyone else, make sure to keep your products separate from theres.
As a result of this my EC (inflammation) has reduced by 90% and stays this way. I still get a very thin layer of dead skin after showering occasionally but I believe this will eventually disappear in time. The fordyce spots I once had are beginning to fade. It is worth mentioning that this is not an instant thing, it will take some time. But it does not require any effort or leaving the lips alone. I remove the build up of skin, which still occured some time after stopping the paste, but this does not cause damage or irritation to the under layers. The body is creating antigens to what it identifies as a harmful substance, it will take some time for this reaction to calm itself, much in the same way a coeliac sufferer will experience a flare for some time after ingesting even a minor amount of gluten, as the body goes into hyper-drive to produce antigens to the agent, in that case the gliadin protein is the agent the body is reacting to. The skin of the lips is going through a repeated process of hyperkeratosis to protect itself from damage, once the source of inflammation is removed, you can remove the excess (dead skin) gently to avoid embarrassment. The deeper layers will remain sound provided you avoid contact with future irritants.
These are my lips now: 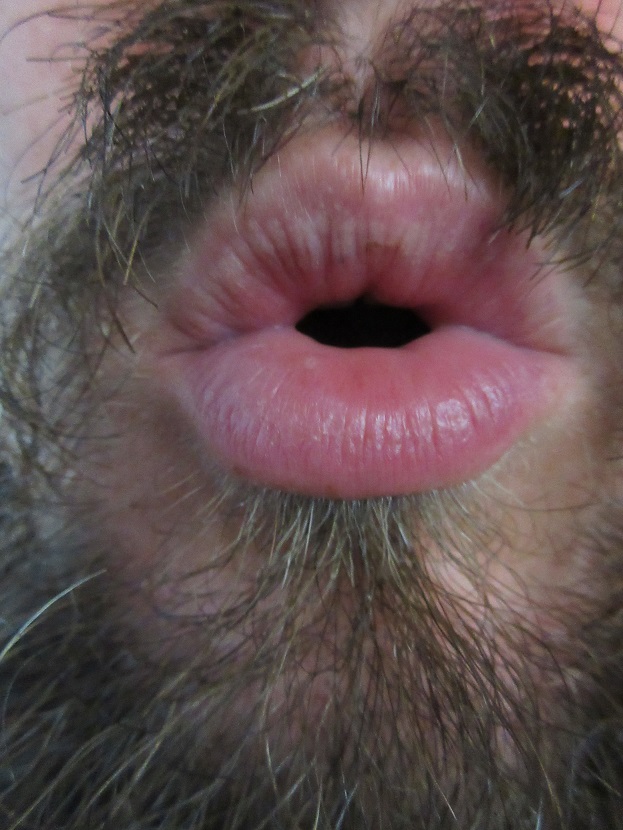 I won't probably ever come back to this forum. May check once or twice a year.
I can also report that my LS has improved. Tweet
All of my messges on this board     All of my messges anywhere