The COVID-19 pandemic has had an unprecedented impact on healthcare systems globally, giving rise to significant morbidity and mortality. Vaccination has been widely regarded as the most important strategy to contain the pandemic. Whilst local side-effects of the BNT-162b2 (Pfizer-BioNTech) vaccine are well known, concern has emerged due to sporadic reports of immune-mediated adverse effects (Cines and Bussel, 2021; Rela et al., 2021). As of August 19, 2021, 4.54 million individuals had received COVID-19 vaccines in Singapore (Oxford Martin School UoO, 2021). We report a case series of two patients who developed aseptic meningitis after vaccination.

Case 1. A 43-year-old woman presented 4 days after the second dose of BNT-162b2 vaccination with fever, severe headache, myalgia, and generalized papular rashes over her trunk, back, upper and lower limbs. Apart from uterine fibroids, she had no significant past medical history. She was managed initially as for infectious meningitis with ceftriaxone and acyclovir. Brain magnetic resonance imaging (MRI) was performed which showed no abnormal parenchymal or leptomeningeal enhancement. Serum C-reactive protein (CRP) and her erythrocyte sedimentation rate (ESR) were elevated at 162 ​mg/L and 54 ​mm/h respectively. Lumbar puncture revealed a mildly elevated opening pressure of 22cmH2O, and cerebrospinal fluid (CSF) assessment revealed a lymphocytic pleocytosis of 265 leukocytes/uL with an elevated protein of 0.96 ​g/L. Flow cytometry of the CSF showed leukocytes comprising predominantly small T-cells (84% of total nucleated cells) admixed with smaller numbers of monocytes, B, and NK-cells. In addition, the CD4+ T-cell population was moderately expanded resulting in a skewed CD4:CD8 ratio of 8.4. B and NK-cells were non-clonal and unremarkable in phenotype. Other extensive investigations for an underlying infectious, malignant or auto-immune etiology were unremarkable (Table 1). Antimicrobials were subsequently stopped, and the patient was managed with non-steroidal anti-inflammatory drugs (NSAIDs). Her symptoms of fever, myalgia and rashes completely resolved and her headache improved upon discharge. At follow-up one month later, she remained well and asymptomatic (Cines and Bussel, 2021; Rela et al., 2021; Oxford Martin School UoO, 2021).

Case 2. A 38-year-old woman with no past medical history reported a new-onset headache, nausea and neck pain starting on day 10 after the first dose of BNT-162b2 vaccination. She presented to our hospital at about 3 weeks post vaccination as her headache was persistent and debilitating. Brain magnetic resonance imaging (MRI) showed a tiny 0.4 ​cm enhancing linear focus seen in the right hemipons with faint T2W/FLAIR hyperintensity suggestive of a capillary telangiectasia, with otherwise no abnormal parenchymal or leptomeningeal enhancement. Her ESR was elevated at 31 ​mm/h. Lumbar puncture revealed a normal opening pressure of 17cmH2O, and CSF assessment revealed lymphocytic pleocytosis of 340 leukocytes/uL with an elevated protein of 0.74 ​g/L. Unmatched oligoclonal bands were present in the CSF. Flow cytometry of the CSF showed hypercellularity, comprising mostly T-cells (88.7% of total nucleated cells) and increased numbers of NK-cells (8.7% of total cells). Smaller numbers of monocytes, B-cells and plasma cells were also present. T-cells showed a mildly skewed CD4:CD8 ratio of 3.9. B and NK-cells were unremarkable in phenotype and non-clonal. Other investigations were unremarkable (Table 1). She was treated with non-steroidal anti-inflammatory drugs (NSAIDs) and her headache had resolved upon discharge. The patient remained well and asymptomatic at one-month follow-up.

In both patients, SARS-CoV2 PCR tests of a nasopharyngeal swab sent during their admissions returned as negative. We determined antibody status in the patients' serum and CSF using the Elecsys Anti-SARS-CoV-2 antibody tests (Roche Diagnostics, Switzerland) according to the manufacturer's instructions for serum. These are electrochemiluminescent sandwich immunoassays using a recombinant protein targeting the nucleocapsid (N) and spike (S) antigens respectively. Both patients demonstrated presence of spike antibodies in both sera and CSF, but absence of nucleocapsid antibodies suggesting that they have had mRNA vaccines targeting the spike protein, but no prior exposure to COVID-19 (Fig. 1).. (Ebinger et al., 2021) 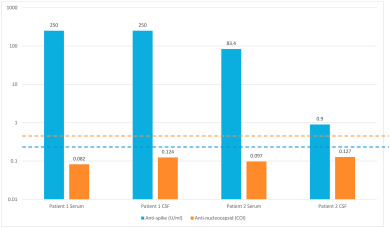 As of November 2, 2021, 7.13 billion doses of COVID-19 vaccines have been administered globally, with 49.7% of the world population having received at least one dose of a COVID-19 vaccine. In Singapore, 82.7% of the population is fully vaccinated (Hannah Ritchie et al., 2020). While the benefits of the COVID vaccines far outweigh the risks, side effects continue to be reported, some of which are common, such as headache (Sekiguchi et al., 2021), and others are much rarer. Although most of these headaches are benign and self-limiting, in patients with severe symptoms, the possible differential diagnosis of aseptic meningitis needs to be investigated.

The incidence of aseptic meningitis varies worldwide and with age. It has been reported as 37 cases per 10,000 admissions in Singapore (Tee et al., 2002) in a pediatric cohort, while it has been reported as 11 cases per 100,000 person-years in the United States of America (Hammer and Connolly, 1992). Children are expected to have a higher annual incidence, ranging from 70 cases per 100,000 in children younger than one year, 5.2 cases per 100,000 in children one to 14 years of age, and 7.7 per 100,000 in adults in Europe (Martin et al., 2016; Kupila et al., 2006). Drug-induced aseptic meningitis is rare and a diagnosis of exclusion. Common causative agents would include nonsteroidal anti-inflammatory drugs, antimicrobials, intravenous immunoglobulin, intrathecal agents, and vaccines (Jolles et al., 2000). The initial reports and observations of aseptic meningitis after measles-mumps-rubella (MMR) vaccines were case reports and case series. This risk was later confirmed at 1 per 10,000–15,000 doses upon post-marketing surveillance (Miller et al., 2007). While further surveillance is required to prove association and causation of COVID vaccination and aseptic meningitis in our patients, we believe that it is important to alert clinicians of this potential association.

Saito et al. recently reported a similar case of aseptic meningitis after administration of the BNT-162b2 (Pfizer-BioNTech) vaccine (Saito et al., 2021). Aseptic meningitis after vaccination has previously been detailed in influenza (Bihan et al., 2019) and mumps, measles and rubella vaccinations (Miller et al., 1993). mRNA vaccines utilize the translational machinery of cells to produce properly folded and fully functional proteins. The majority of the protein produced will be incorporated as a part of the class I major histocompatibility complexes (MHC), and presented to CD8+ and CD4+ cells. Host dendritic cells that are transfected by an mRNA vaccine process the assembly of class II MHC and present it to immune cells (Park et al., 2021).

Antibodies directed at the spike protein are elevated in both our patients in both sera and CSF. Patient 1 had a total spike antibody of >250 U/mL (non-reactive (NR) ​< ​0.8 U/mL) in the sera and CSF, while Patient 2 had a level of 83.4 U/mL in the sera, and 0.9 U/mL (NR ​< ​0.8 U/mL) in the CSF. A high CD4+/CD8+ ratio in the blood has been associated with a good response towards other vaccines and a predictor of higher antibody titers (Sari and Taskapan, 2012; Avelino-Silva et al., 2016) in certain populations (Strazielle et al., 2016). CD4+ T cells regulate the response of CD8+ T cells after vaccination through complex mechanisms (Laidlaw et al., 2016). The CD4+/CD8+ ratio has been used as a marker of immune activation and immune senescence in acquired immunodeficiency syndrome (AIDS) and non-AIDS events (Bruno et al., 2017). In the CSF, adaptive immune cells have different phenotypes. Proportions of T cell subsets were significantly increased in neuroinflammatory disorders, with CD4+ T cells proportionally more expanded than in CD8+ T cells (Han et al., 2014). An elevated CSF CD4+/CD8+ ratio has been reported in aseptic meningitis (Ross et al., 1991), multiple sclerosis, tension headache (Mix et al., 1990), neurosarcoidosis (Paule et al., 2021) and myasthenia gravis (Müller et al., 1990). Notably, in aseptic meningitis, CD4+ T lymphocytes were found to be increased in the acute phase, and decreased in the recovery phase, while CD8+ T-lymphocytes gradually accumulated in the recovery phase (Tabata et al., 1994), translating to a high CD4+/CD8+ ratio in the acute phase of aseptic meningitis, and a low CD4+/CD8+ ratio in the recovery phase. A strong neuroinflammatory response is seen in both of our patients described here, with elevated CD4+/CD8+ ratio of 8.4 in Patient 1, and 3.9 in Patient 2 in the CSF, reflecting the acute phase of aseptic meningitis and immune activation.

While the blood brain barrier (BBB) is usually impermeable to circulating leukocytes and antibodies, in some neurological infections, antigens are presented to the endothelial basement membrane and parenchymal basement membrane, causing antigen-specific CD4+ T cells to secrete IFN-γ. This reduces tight junctions between endothelial cells, allowing a regulated opening of the BBB for the entry of antibodies to enter in order to provide protection against neurotropic viruses. However, controlled access is required in order to prevent autoreactive CD4+ T-cells from destroying vascular barriers and the BBB as occurs with an unregulated immune system (Kupila et al., 2006). In a study of 31 patients with COVID-19 and neurological manifestations the majority had a low ratio of CSF to serum IgG suggesting that the presence of antibodies in the CSF was due to a leaky BBB. On the other hand, there are reports of patients with COVID disease who had evidence of intrathecal synthesis of antibodies by various indices or measures such as albumin ratios or unmatched oligoclonal bands (Alexopoulos et al., 2020; Lewis et al., 2021). The one previous report of aseptic meningitis following mRNA vaccination (also in a middle aged Asian woman interestingly) showed a serum:CSF SARS-CoV2 antibody ratio of >2 without evidence of intrathecal synthesis. For other causes of vaccine induced aseptic meningitis detected through pharmacovigilance exercises, the pathophysiology has not been clearly defined (Bihan et al., 2019), however with the live attenuated yellow fever vaccine, intrathecal synthesis of antibodies has been documented in cases of aseptic meningitis (Pires-Marczeski et al., 2011). Our two cases had high ratios of serum:CSF antibody levels, however, at least one case had mismatched oligoclonal bands suggesting the possibility of intrathecal synthesis of antibodies to the spike protein.

The mRNA vaccines currently in use are known to be reactogenic with a range of inflammatory adverse events which have not been completely explained, such as myocarditis in young men. Aseptic meningitis might be another complication that clinicians need to be alerted to, although larger surveillance studies are needed to establish if indeed post vaccination rates of aseptic meningitis are consistently above baseline. Both our cases and the previous Japanese case recovered completely with no residual neurological deficits. At present, the benefits of vaccination with these vaccines outweigh the risks although the quest for a better vaccine with fewer adverse effects and the ability to prevent transmission in addition to preventing severe disease must continue.

Written informed consent was obtained from both patients for publication of this case series. A copy of the written consent is available for review.

All authors have no competing interests to declare.