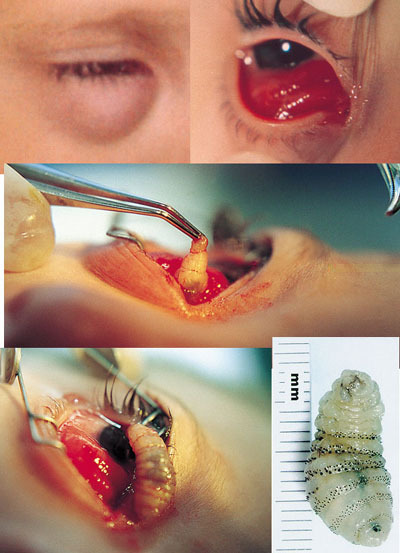 
Bizarre as it may seem, the photos are authentic.

Images were published inside an article entitled "Anterior Orbital Myiasis Caused by Human Botfly," published in the July 2000 number of the Archives of Ophthalmology, a journal of the American Medical Association.


"Myiasis" is the medical term for a maggot (fly larva) infestation of a living body. In this case, the patient was a 5-year-old boy treated by U.S. Air Force surgeons in a rural area of the Republic of Honduras. "The respiratory pore of a late-stage larva of the human botfly (Dermatobia hominis) was located in the anterior orbit," says the article abstract. "The larva was gently removed under general anesthesia through a small incision in the conjunctiva." The patient was apparently none the worse for wear.

According to entomologists, the human botfly lays its eggs on the bodies of other insects (such as mosquitoes), which then transfer the eggs to animal or human hosts by direct contact. When a botfly egg hatches, the larva burrows into the host's skin head-first and begins feeding.

This nasty creature is found mainly in Central and South America, but there are other species of flies known to responsible for cases of myiasis in North America, mainly blowflies. According to an epidemiological study conducted in 2000, most instances of myiasis acquired in the United States are the result of blowflies laying their eggs in pre-existing wounds.

A 5-YEAR-OLD boy with inferior orbital swelling and an erythematous mass arising from the inferior cul-de-sac of his right eye (Figure 1 and Figure 2 to the right) was seen by an Air Force Mobile Ophthalmic Surgical Team working in a rural area of the Republic of Honduras. The respiratory pore of a late-stage larva of the human botfly (Dermatobia hominis) was located in the anterior orbit. The larva was gently removed under general anesthesia through a small incision in the conjunctiva (Figure 3, Figure 4, and Figure 5 to the right).

Figure 3. A large white larva being removed from the right anterior orbit through a conjunctival incision.

Figure 5. Based on the morphology of the anterior and posterior spiracles and the exterior spines, the larva was determined to be a mature larva of the human botfly (Dermatobia hominis).

Ophthalmomyiasis refers to the invasion of the lids, conjunctiva, cornea, and rarely the orbit or globe of the mammalian eye by fly larvae (order Diptera).

The sheep nasal botfly (Oestrus ovis) is the most common cause of ophthalmomyiasis.

1 The human botfly (D hominis)
Back To Album
Copyright infringement? Contact the Webmaster and request removal of this file!
URL:

Thumbnail:
To embed this file into your forum/blog entry, highlight the URL, right-click and copy it, and then paste it into the body of your forum or your blog message, while in text mode (plain text editor).

If posting a message by using a HTML editor (FCK or MCE), you will have to use the appropriate buttons (Insert Image) from the editor toolbar. HTML editors have buttons for inserting hyperlinks, images and other HTML objects.


Free Clark DVD!
An amazing video about the Clark protocol that will open your eyes! An...